Im not sure who will read these blogs, but I really like the material and I hope that someone will find it useful in the future. Its also a pretty good way to archive a lot of content I may want to keep in the future. So... without further adu, I guess, here is the Mandelbrot set.

Dispite it's name, the Mandelbrot set was first drawn in 1978 by Robert W. Brooks and Peter Matelski while exploring fractional linear transformations in the complex plane (Source). Then, shortly after, in 1980, it was rendered by Benoit Mandelbrot at the Thomas J. Watson Research Center. He was studying the parameter space of quadratic polynomials (\(ax^2 + bx + c = 0\)). Those of you who are already framiliar with the Mandelbrot set are probably able to see where this is going. In his paper titled "Fractal Aspects of the Iteration of \( z \to \lambda z (1-z) \) for complex \(\lambda\) and \(z\)" (you can read the paper here) Mandelbrot explores the iteration of a function \(f\) and how that iteration behaves with different parameters. We will essentially follow his work, but with modern tools because I am writing this on a laptop with more processing resources than IBM's best computer at the time. (They had a whole 333 megaflops in 1988!)

In plain terms, a function is just a relationship that maps inputs to outputs according to some process. (That isn't the most precise but it is a good intuition for how we are thinking of functions here.) In order to iterate a funciton, we simply take apply the function to some input to obtain an output, then we apply the same function to that output to obtain another, different output. To keep track of this process, we need some notation.

Now that we have some of the basics under our belts, we can get to what the Mandelbrot set actualy is. The mandelbrot set is a set of points in the complex plane \(c\in\mathbb{C}\) such that the function \(f(z)=z^2+c\) doesn't diverge when the function is iterated starting with \(z_0=0\). When we say that something doesn't diverge, we are essentially saying that the \(z_0,z_1,z_2...\) don't "blow up" to infinity as we iterate.

Now, we have a method to determine which points are in the Mandelbrot set and which ones are not. The last thing we have to do is color the pixels in an image based on whether or not their corresponding complex number is in the Mandelbrot set or not. This chunk of code is also a bit complicated so we will break it down step by step.

The final step is to simply plot the image so that we can see the results of our computation. 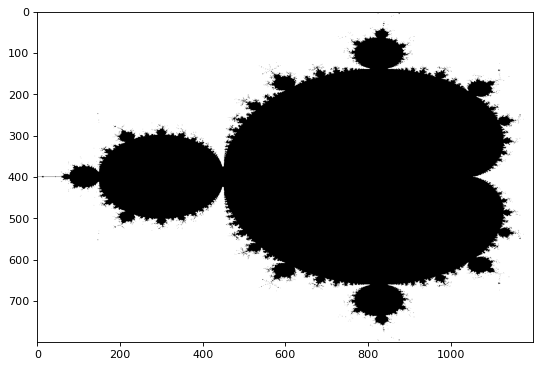 And there it is! Our rendering of the mandelbrot set. We used a pretty simple method to determine the color of each pixel by whether it is in the set or not, but there are many other ways that you can color it.

We know that some points diverge to infinity and get arbitrarily large, but what about the other points? What do they do? When a point doesn't diverge to infinity, it actually converges to some set of values. Thats right, more than one value (sometimes)!

Now with respect to the Mandelbrot set, some points in the set converge to a single value as described above, but there are other points that, when iterated, converge to jumping around between a few values. Maybe we can color the pixels depending on the length of the cycle of points it is converging to. Another possibility is coloring the pixels not in the set by how fast they diverge. The posibilities are actually endless